For a paddler, knowing tides is just as important as knowing the weather. Tidal flow changes approximately every 6 hours. Knowing the direction of the tides when planning your kayaking trips, will make you a better paddler.

Although both the sun and the moon exert gravitational forces on the Earth, the moon’s pull is more robust due to its proximity to the Earth.

A tidal force is defined as the ability of the moon to raise the Earth’s tides. The moon has a tidal pull that affects the entire earth. Because Earth’s land surfaces are less pliable, this has minimal effect. However, land surfaces can shift up to 55 centimetres (22 inches) every day.

Of course, the tidal force of the moon has a considerably higher impact on the ocean’s surface. Because water is a liquid, it reacts to gravity more quickly, more dramatically. 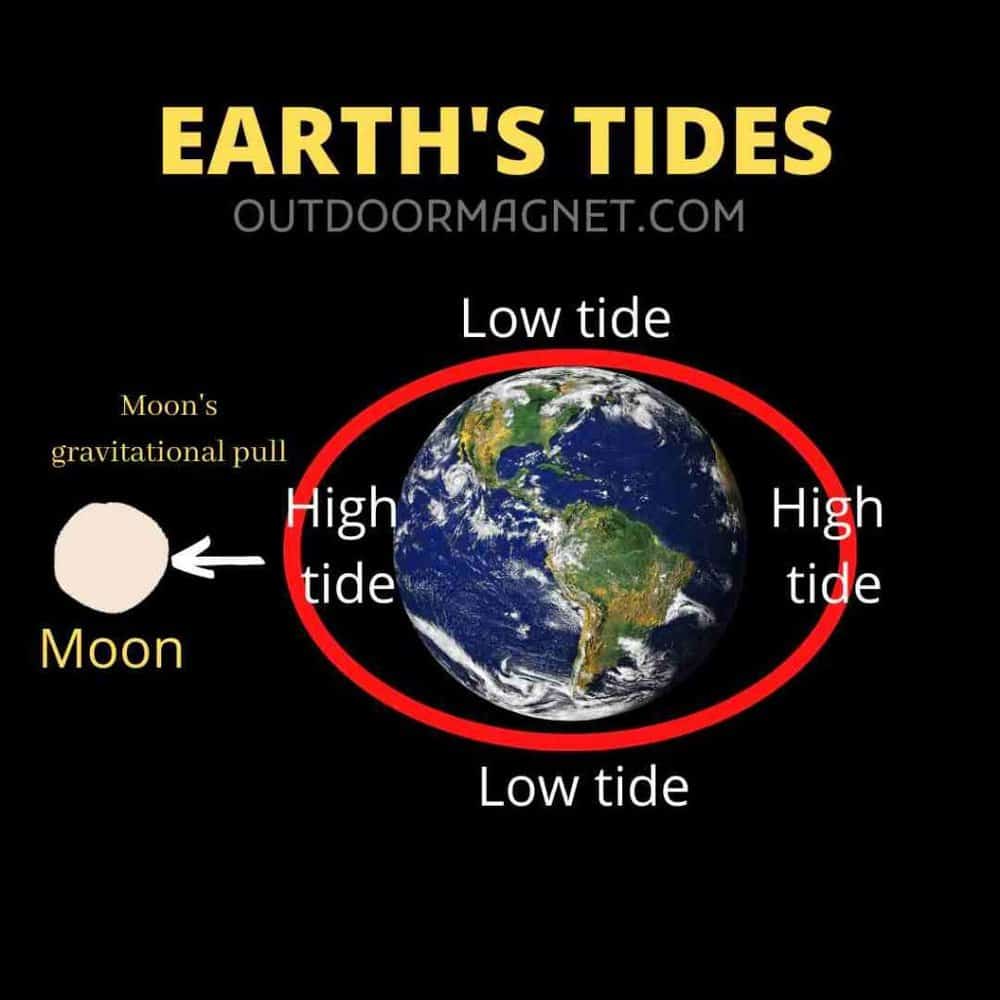 How Tides Affect Your Paddling

If you are at a river far away from the sea, then rivers will usually run in one direction. However, if you are kayaking at a coastal river, then water can flow in both directions. You will want to paddle in the same direction of the river flowing.

When low tides come, water will move back to the sea. When absolute low tide is reached, then you will notice the direction reverses and water flow will race towards high tide. This is when water flows back towards land.

Understand when is the maximum speed

To paddle comfortably, find out when water will be flowing at the maximum speed. Then this is the optimal time to be paddling with the flow. You will find that the fastest current is at the midpoint between high and low tides. Or another guideline is the middle 2 hours of each tidal cycle is where you find water movement to be the most powerful.

If you try to paddle against a strong flow, sometimes it may be too strong that you will find yourself barely moving. Otherwise, if you are looking to paddling whichever way, then look for the time to paddle when the flow speed is negligible.
[ Also Read: Our detailed guide on Kayak Paddling Techniques so you can paddle more efficiently ]

Plan for the best time to paddle

Plan ahead if you intend to ride all the way to the end of the river and get a ride back. Or if you intend to paddle back to your starting point. Have an idea what your paddling speed is. You can plan to paddle with the flow for the first part of your trip, and then when the water reverses, turn and head back.  Make sure you are able to get back before it gets too dark. 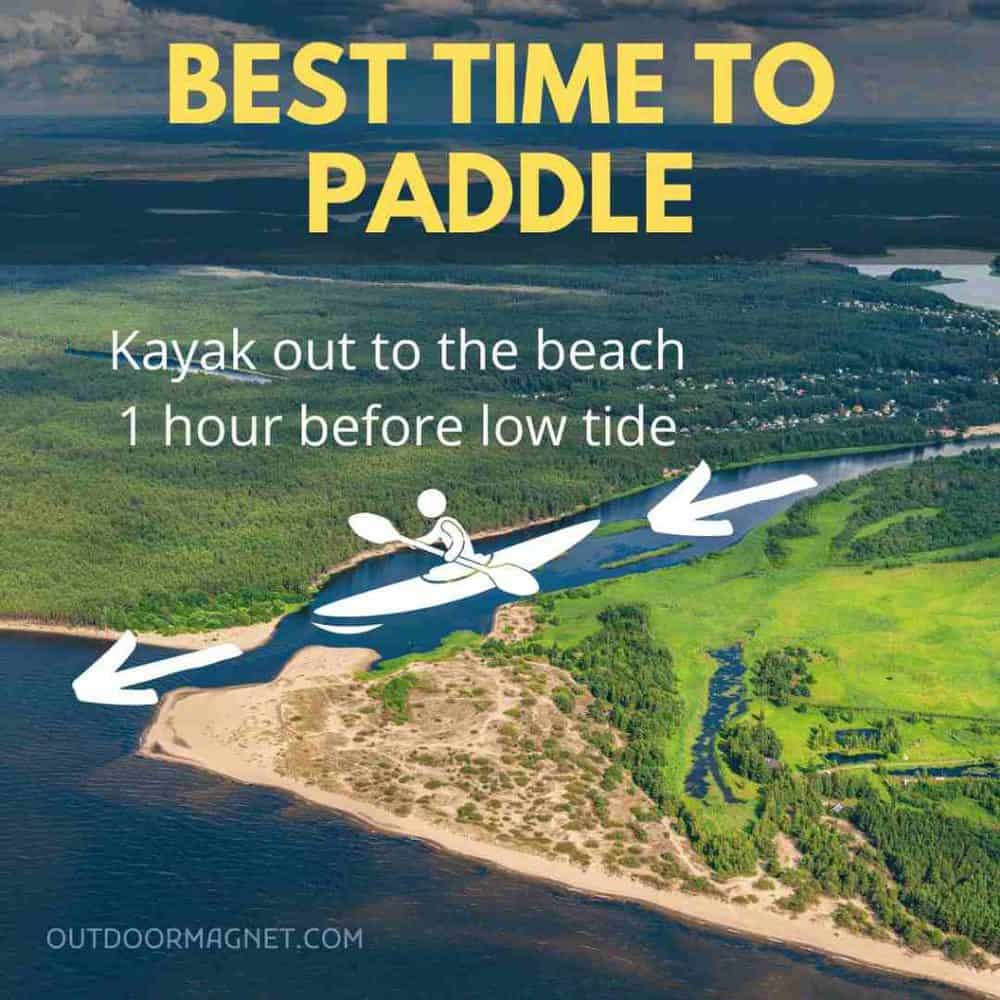 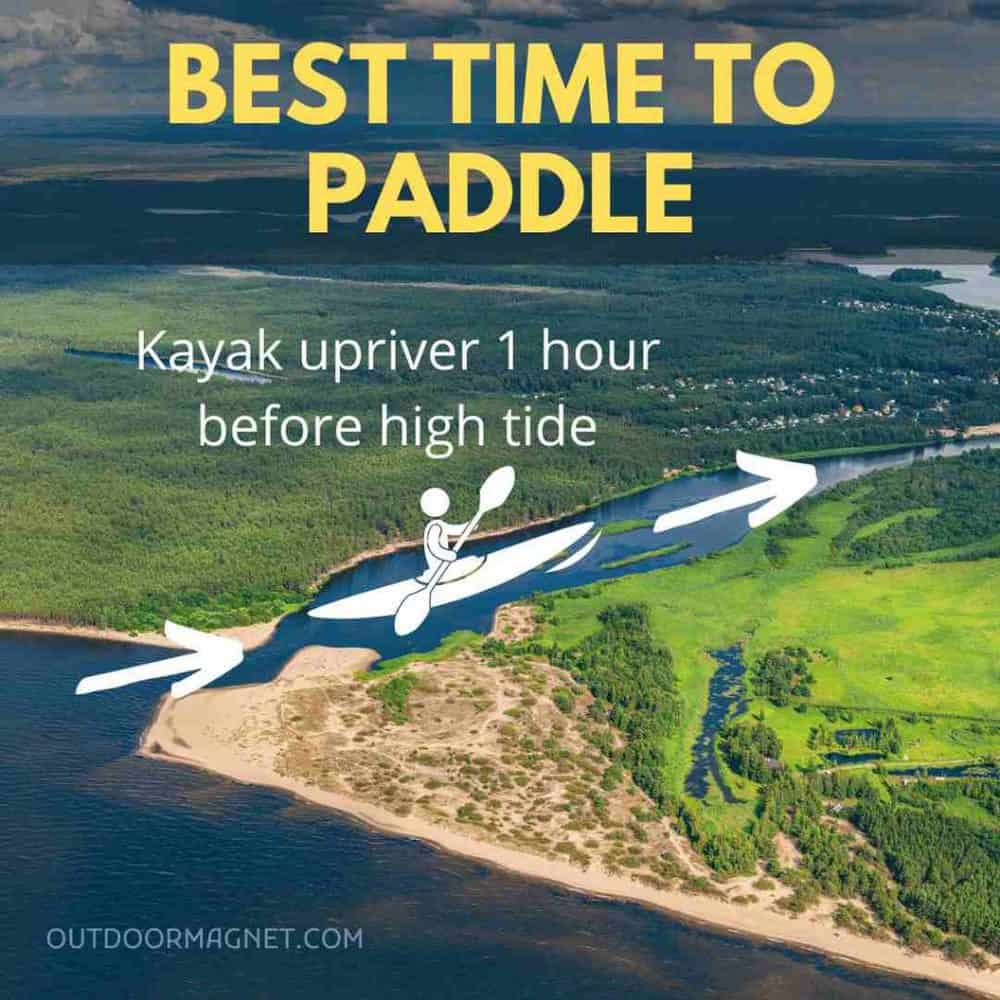 What happens if you have to paddle against the tide

Note that tides are the strongest at a narrow channel, as it acts like a funnel. So if you are paddling at entrances to harbors or bays, you can expect the tidal flow to be very strong.

In case you are unsure about How Ocean Currents Work, check out our guide so that you can avoid and survive in the current.

On the side of the Earth-facing the moon, there is one bulge. The direct tidal force of the moon is drawing the water toward it. On the other side of the planet, there is another bulge—the water bulges in this location in the opposite direction of the moon, rather than toward it. The bulge is caused by the moon’s gravitational influence on the earth (rather than the ocean).

The moon is always visible from one high tide, whereas the other faces away from it. Between these high tides come low tides, periods of lower water levels. An ebb tide is a flow of water from high tide to low tide.

The majority of tides are semidiurnal, meaning they occur twice a day. When an ocean-covered location faces the moon, for example, the moon’s gravitational effect on the water causes a high tidal surge.

The tide ebbs when that place moves farther from the moon’s influence as the Earth revolves. That’s low tide in that region right now. As the Earth continues to rotate, another high tide happens in the same region when the moon is on the other side of the Earth (low high tide). The Earth continues to rotate, the tide ebbs, a new low tide arrives, and the 24-hour cycle begins all over again.

The tidal range is the vertical difference between high and low tide. As a result of the sun’s gravitational attraction on the Earth, the range varies predictably every month. Despite being about 390 times further away from Earth than the moon, the sun’s massive mass nonetheless has an impact on the tides.

Tides do not follow the same patterns everywhere since the Earth’s surface is not uniform. The range and frequency of tides are affected by the shape of the seacoast and the form of the ocean floor. The water can stretch across a considerable region along a smooth, broad beach.

The tidal range may be only a few millimeters. The tidal range in a limited region, such as a narrow, rocky entrance or bay, might be several meters. Enclosed waters, such as the Mediterranean or the Baltic, have the lowest tides. They are around 30 cm tall (about a foot). The Bay of Fundy in Canada has the world’s biggest tidal range. The waves there surge and fall about 17 meters (56ft.)

The solar tidal force interacts with the moon’s tidal force when the sun, moon, and Earth are aligned. The combined pull can generate Spring tides, which are the highest and lowest tides of the year. Spring tides occur whenever there is a new or full moon and are unrelated to spring. (The term comes from the German word springen, which means “to jump.”)

Spring tides can cause changes in tidal flow intensity, especially in tighter passages. So you may want to be alert when you kayak through a narrow passage. When it is high tide, you will experience stronger current pushing you inland. During low tide, the current will push you to the open sea.

The moon faces the Earth at a right angle to the sun during the interval between the two spring tides. When this happens, the sun’s and moon’s pulls are feeble. This results in lower-than-normal tides. Neap tides are the name for these types of tides.

Spring tides and Neap tides should be considered when launching or retrieving your kayak. 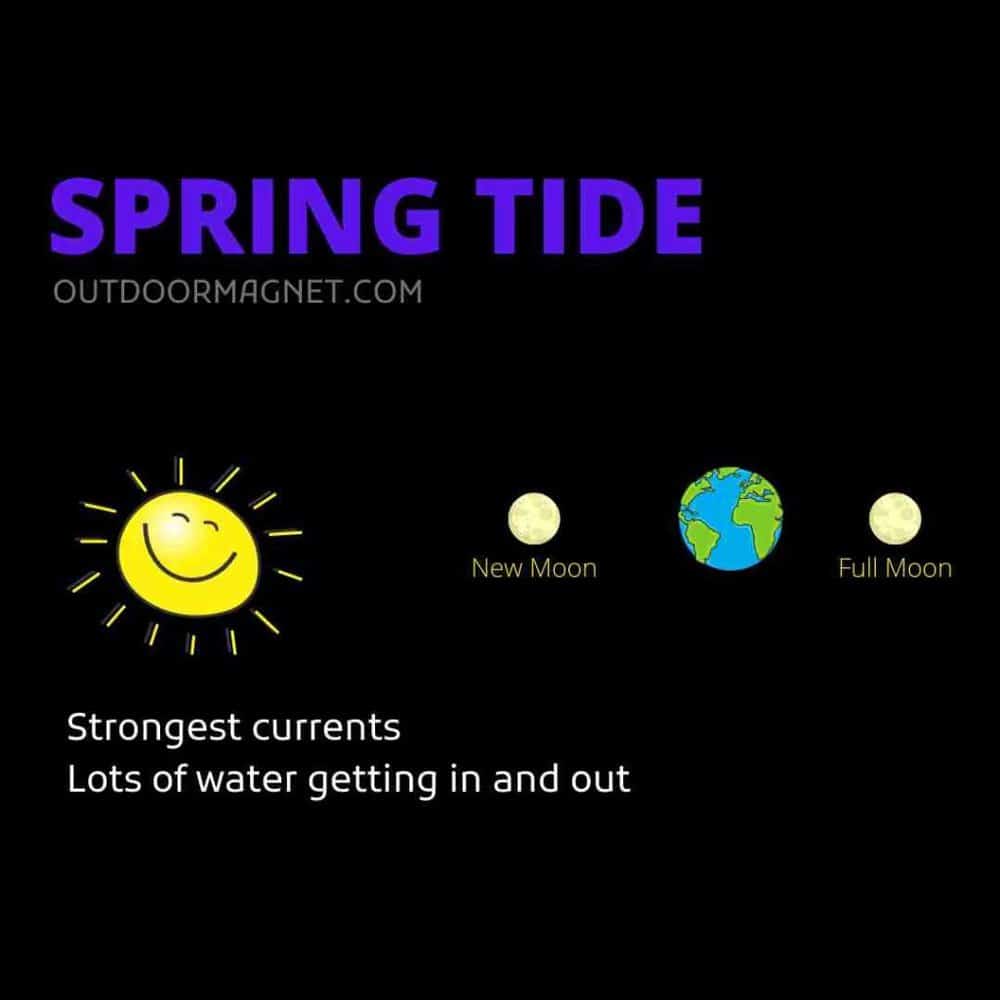 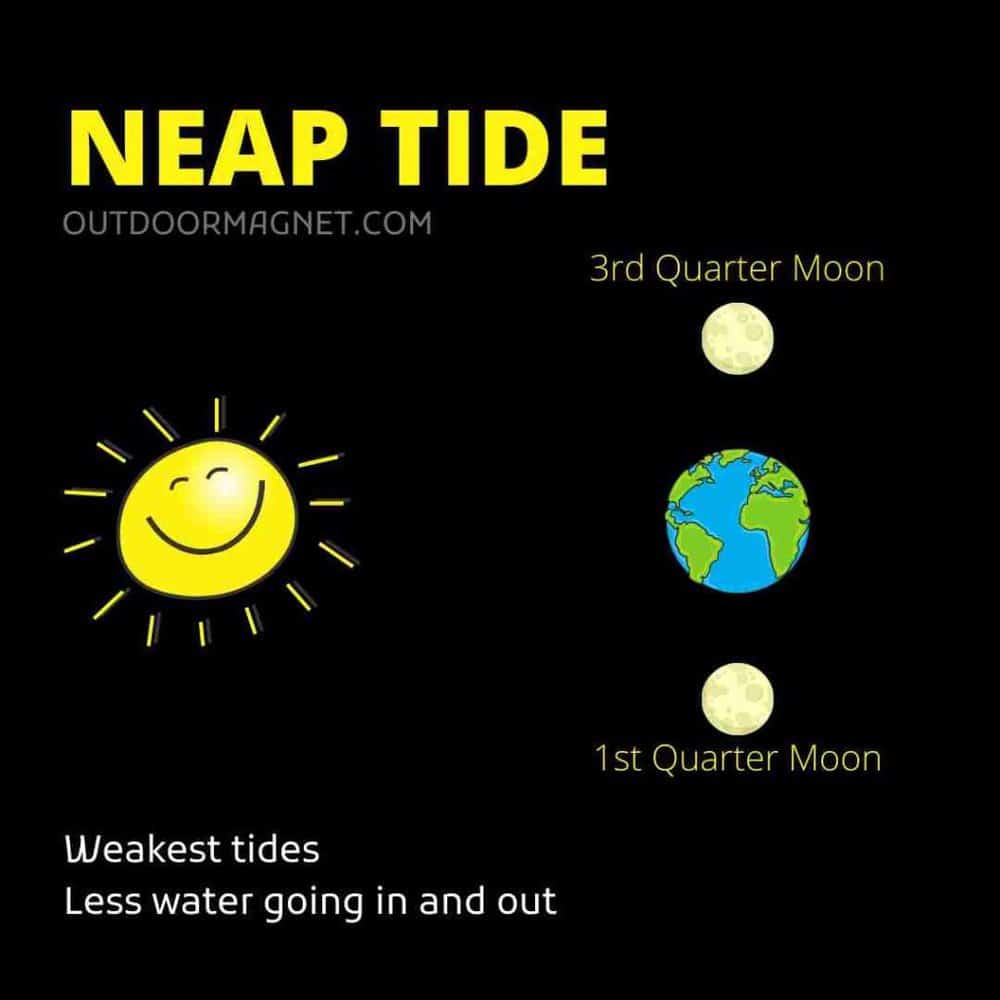 The ocean’s tidal patterns generate several fascinating effects. Tides are also linked to characteristics that are unrelated to them.

A tidal bore happens when a river pours into the ocean or sea near the shore. A tidal bore is a powerful tide that pushes up the river against its stream. This is a full-fledged tidal wave.

In the ocean, tidal forces create some fascinating effects. Tides are also linked to phenomena that are unrelated to them. When a river empties into the ocean or sea, a tidal bore develops along the shore. A tidal bore is a powerful tide that pushes up the river against the stream.

A tidal bore, on the other hand, is not the same as a tsunami. A tsunami is a Japanese term that means “harbour wave.” Tsunamis are created by undersea earthquakes and volcanoes, not by the tides. Tsunamis are linked to tides because their reach extends beyond a certain area’s tidal range.

Red tides, on the other hand, have nothing to do with genuine tides. An algal bloom is sometimes known as a red tide. Algae are aquatic animals that are tiny in size. The waves and tides become crimson as billions of red algae develop or “bloom” in the ocean.

Riptides, on the other hand, are not a tidal characteristic. Riptides are powerful ocean currents that flow parallel to the water’s surface. A riptide is a current that goes from the beach to the open ocean. Surfers benefit from riptides because they avoid having to paddle out to sea. Swimmers can be pushed out to sea by rip tides, which can be highly dangerous!

Why Does It Matter?

Understanding tides can make a big difference to your kayaking trip. So it is important to pay attention to the tidal flow, even if you are only going for an hour. It can turn into a number of hours or you can find yourself not being able to reach your destination at all.

Read here for Safety Tips For Kayaking before you embark on your kayaking trip. 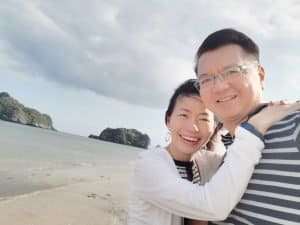 We are outdoor lovers, travellers, and writers all rolled into one. You have seen our posts here reviewing lots of different types of outdoor gear, camping equipment, RV equipment, kayaking, to cycling. Our reviews are guided by our years of experience being outdoors. We are happy to share our knowledge with you to make a better choice when you are outdoors.

We hope you enjoyed this article and if you have questions about Tides Explained or want to leave your own personal comments, feel free to leave a comment below. We would love to hear from you! 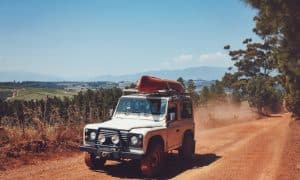 How To Transport Your Kayak Safely 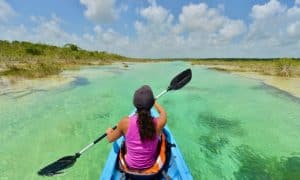 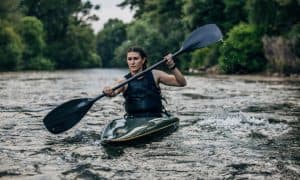 How Many Calories Does Kayaking Burn 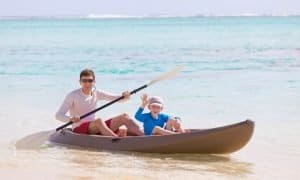 10 Must-Read Tips For Kayaking With Kids 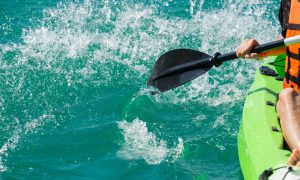 How to Hold a Kayak Paddle Correctly

A Quick Guide To The Different Types Of Kayaks

As an Amazon Associate I earn from qualifying purchases.